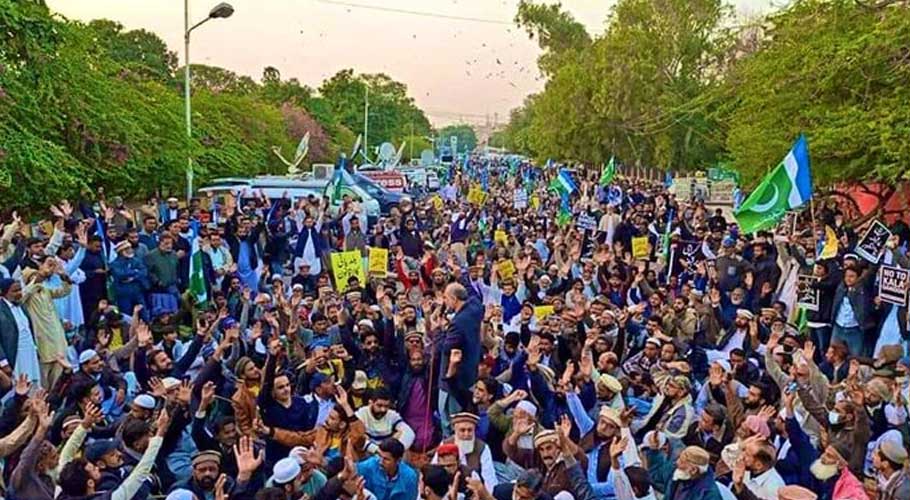 KARACHI: A 29-day-long sit-in held by the Jamaat-i-Islami outside the Sindh Assembly building in protest against the Sindh Local Government Amendment Act 2022 bore fruit earlier this week, when the Pakistan People’s Party government in the province agreed to further amend the law. It is being dubbed as the revival of the JI in Karachi.

A delegation led by Sindh Minister Syed Nasir Shah assured the JI leadership that those health and education sectors which were withdrawn from the control of local government are returned back to the Mayor.

“Karachi mayor would be chairman of the Karachi Water and Sewerage Board. The Provincial Finance Commission would be set up within a month of the local government elections. Similarly, the city administration would have its due share in motor vehicle tax,” he said.

The minister said the Solid Waste Management Board, which was so far operating under the provincial government, would also be handed over to the local administration. All educational institutions, which were under the Karachi local administration before the amendments were introduced in the law, would also be returned to the elected city government.

Deprivation of the people

The youth of Karachi are deprived of jobs despite being endowed with knowledge and wisdom and even after paying hefty taxes to the citizens, they are facing unavailability of basic amenities. Children are deprived of such facilities as education, recreation, public roads, medical treatment.

Despite the PPP is in power in Sindh for a long time, Karachi has become a center of deprivation. Sadly, the PPP leadership has never made sincere efforts to alleviate the plight of the citizens but is increasing the frustrations and difficulties of the citizens.

The Muttahida Qaumi Movement-Pakistan and Pakistan Tehreek-e-Insaf have rejected the agreement inked between the Sindh government and Jamaat-e-Islami over changes in the disputed local government bill, saying the Pakistan People’s Party’s leaders in the province have deceived the religious party’s leaders.

“Karachi residents and political parties never expected the JI to be so easily deceived,” said Hasan, while addressing a press conference.

Meanwhile, PTI Sindh president and federal minister Ali Zaidi said that “Zardari Mafia” has deceived the JI’s leadership and through the disputed local government legislation, wants to “take over everything.” He said that PPP’s local government bill is against the spirit of the Constitution.

“This mafia has done nothing but rob Sindh in the last 14 years,” he said. Zaidi said the Chief Minister Murad Ali Shah had made promises in the Karachi Transformation Plan’s meeting but after the passage of a year, did not fulfill it.

All major and minor political parties, including the ruling party in the federation and the opposition party in Sindh, Muttahida Qaumi Movement, Pak Sarzamin Party, Muslim League, and Jamaat-e-Islami, started protest against the Local Government Act but Hafiz Naeem-ur-Rehman, Ameer of Jamaat-e-Islami Karachi, emerged victorious in the end.

The Jamaat-e-Islami had clearly demanded that this law be withdrawn and the deprivations of Karachi be removed and it seems that all the political parties in Karachi showed support to the JI’s sit, but some of them turned against JI after the agreement it reached with the PPP government.

No matter what, but the PPP backtracked from its stubbornness and accepted the demands of the JI to empower the LG system and the Mayor of the metropolitan city. It seems that JI has won the battle initially by beating all the political parties of the city, but we have to see that will PPP will stick to its assurances to the JI or it will backtrack from it as some people believe that is was the trick to end the sit-in and expected road blockage to ensure peaceful PSL-7 in the city, but the time will clear the actual position.