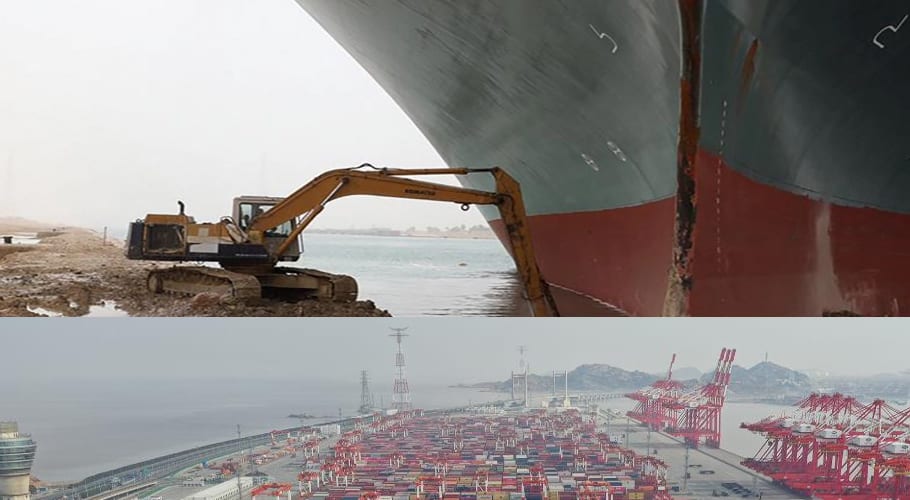 CAIRO, EGYPT: A maritime traffic jam grew to more than 200 vessels on Friday (today) outside the Suez Canal and some pots started changing course as dredgers worked hysterically to free a giant container ship that is trapped sideways in the waterway and disrupting international shipping.

As per details, one salvage expert said freeing the cargo ship, the Ever Given, could take up to a week in the best-case scenario and warned of probable structural issues on the ship as it remains blocked.

The Suez Canal Authority said it welcomed global offers of help, including one from the United States, although it did not say what was offered.

The Ever Given, owned by the Japanese firm Shoei Kisen KK, got wedged on Tuesday in a single-lane stretch of the canal, about 6 kilometers (3.7 miles) north of the southern entrance, near the city of Suez.

The Suez Canal Authority hasn’t gotten the ship unstuck yet but they did make this great sizzle reel of them not getting the ship unstuck set to what sounds like a royalty-free version of the Tenet soundtrack https://t.co/WEf27ekums pic.twitter.com/ZRTeO3m7yU

A team from Boskalis, a Dutch firm specializing in salvaging, is working with the canal authority. using tugboats and a specialized suction dredger that is trying to take away sand and mud from around the port side of the bow. On the other hand, Egyptian officials have banned media access to the site.

An attempt Friday to free it botched, said Bernhard Schulte Shipmanagement, the technical manager of the Ever Given. “Plans are in the works to pump water from interior spaces of the vessel, and two more tugs should arrive by Sunday”, the company said.

An initial investigation showed the vessel ran aground due to strong winds and ruled out mechanical or engine failure as a cause, the company said. GAC, a global shipping and logistics company, had previously said the ship had experienced a power blackout, but it did not elaborate.

Bernhard Schulte said two canal pilots had been aboard the ship when it got stuck. Such an arrangement is customary, but the ship’s captain retains ultimate authority over the vessel, according to shipping experts.

In addition to the over 200 vessels waiting near the canal, more than 100 ships were en route to the waterway, according to the data firm Refinitiv. Apparently anticipating long delays, the owners of the stuck vessel diverted a sister ship, the Ever Greet, to head around Africa instead, according to satellite data obtained by CCN.

A massive container ship — which is almost as long as the Empire State Building is tall — is still lodged in the Suez Canal (it has been there since Tuesday).

It’s created a traffic jam that has ensnared over 200 vessels and could take weeks to clear. https://t.co/r93KLFhtAL pic.twitter.com/yHVsQqYhCV

Others also are being diverted to avoid the canal. The liquid natural gas carrier Pan Americas changed course in the mid-Atlantic, now aiming south to go around the southern tip of Africa, according to satellite data from MarineTraffic.com.

About 10% of world trade flows through the canal, which is particularly crucial for the transport of oil. The closure also could affect oil and gas shipments to Europe from the Middle East.