Until last week, we had a government that barely managed to survive for five months on its own. Even these few months were because the PDM was doubting whether this government has really lost its support or if there was any “prank”?  This is exactly when someone talks to you and says, “He’s got a camera in the black glass case in front of us, waive our hand.”

Before October 2021, their motto was, “We are on the same page.” This proves that the government which couldn’t stay for five months without support could not have come to power in 2018 despite the fraudulent elections. The rule was such that those who were active before the election made up after the election. Jahangir Tareen would go by plane and a ‘phone’ was made before he arrived.

Now the heir of the princely state is trying to make people believe that his was the greatest government in Islamic history and that a superpower conspired against him. As if his downfall was no less than the Ottoman Empire. In the last month, Imran Khan’s statements have changed more than a chameleon. He has pushed the narrative that not only did the United States conspire against him but it also had the support of local ‘Mir Jaffers’. Analysts have focused on the Mir Jaffer but the real point is that he is comparing himself to Nawab Siraj-ud-Daulah. In those days, there were princely states or sultanates, not people’s governments. Rather, it was their ancestral estate or kingdom. You take the example of present Arab states where when the king dies, the next monarch will come from the same family.

One of the special things about these kingdoms is that whether they are generals, ministers or advisers, loyalty is important. Historians have been compelled to write that Mir Jafar was a traitor and betrayed Siraj-ud-Daulah. But in the current system that we are been living, loyal lies to the state and its constitution, not to any individual.

One of the most serious allegations leveled against former US President Donald Trump during his tenure is that he asked then FBI Chief James Comey, “Will you remain faithful to me?” The revelation was made by Comey himself. He was lauded for saying that Instead of being loyal, he assured that “I will be truthful to you.” He also agreed to fully comply with legal orders and refuse to obey any illegal order by saying, “Sir, I cannot obey this order because it is illegal. And I sincerely advise you to withdraw this order too, otherwise problems can arise for him”.

On the contrary, one who takes an oath of allegiance to an individual cannot dare to disobey the order. Because he is not loyal to the state and its constitution but to the individual and as to obey every command. Pakistan is certainly not princely state, Imran Khan was not the nawab, and no government official has taken an oath of allegiance to him, Then why did Imran Khan have to follow the example of kingdom? Shouldn’t he give example from a democratic country? Doesn’t treason exist in democracies that forced them to go back to the era of kingdom?

You might think he made a mistake then you are definitely worng. Imran Khan has chosen this example very thoughtfully. What was the ten-year plan that we have been hearing over and over again for the last four years? If it had been implemented, there would have been only drama in the name of elections. No one had to show loyalty to the state and its constitution but to each other. It seems that under the hybrid system, Imran Khan had dreamed of imposing himself as Siraj-ud-Daulah for life. And it was a dream come true. The still mentally feels like Siraj-ud-Daulah. That is why he remembers Mir Jafar. When they have nothing to do with democracy, then why give the example of traitors to democratic states?

In a democratic state, people like General Musharraf are not prosecuted for treason because they did not show loyalty to Nawaz Sharif but they violated the constitution. No doubt General Bajwa has taken steps that are not permitted by the Constitution.. The military’s interference in politics was unconstitutional. The PDM focused all its efforts on the point that the army should withdraw from the political arena. Nawaz Sharif, who faced court and jail during the tenure of General Bajwa, mentioned him by name many times during PDM meetings but never called him a “traitor”. Because deviating from the constitution does not mean treason. Abrogating the Constitution and introducing PCO is treason. Is it not a strange spectacle that those who suffered from General Bajwa’s constitution deviation did not call him a traitor even in difficult moments whereas during whose tenure General Bajwa took the army to constitutional limits are calling him a traitor?

Is it treason to correct one’s mistake? Can abandoning the path of deviation from the constitution and returning to the limits be considered treason? PPP co-chairman Asif Ali Zardari rightly said that General Bajwa should be saluted, he should not be fought. Only he can confront Genera Bajwa whose dream to become Siraj-ud-Daulah has been shattered. 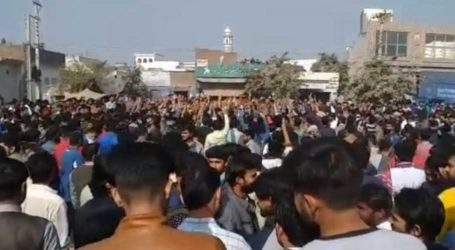