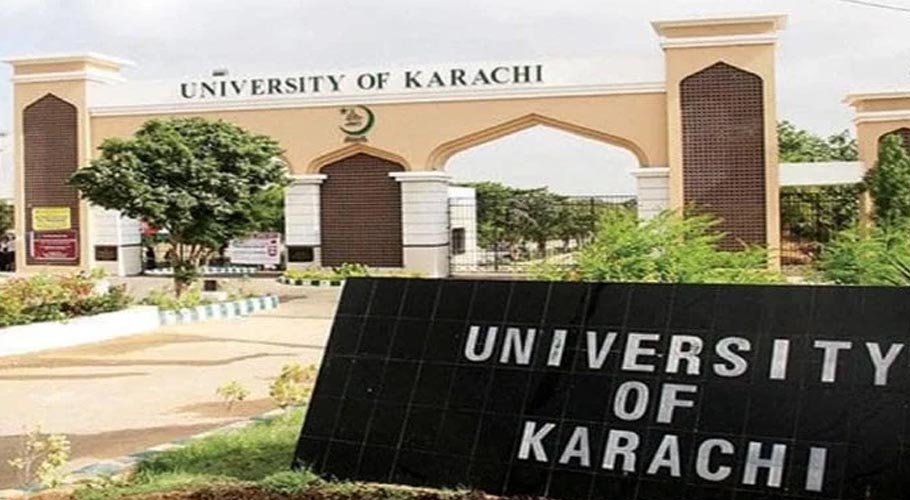 KARACHI: The program of Karachi University has been changed for the third time after the incident of the terrorist attack on the Chinese Institute at Karachi University. Few teachers are criticising also due to the security of DG Rangers, and the closure of canteens.

Dr. Maqsood Ali Ansari, Acting Registrar, University of Karachi, issued Notification No.P.A / 2022_280 / C on May 6, in which instructions were given to the Chairman, Chairperson, in-charges, Deans of Faculties and Directors of the Center The Acting Vice-Chancellor has convened an important meeting in his office on May 10 at 2.30 pm in which important decisions regarding current security issues will be taken. 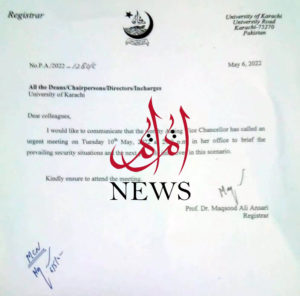 After which the Acting Registrar Dr. Maqsood Ali Ansari issued Notification 915/2022 on May 9 in which he once again instructed the Chairman of the Departments, Chairperson, Deans of the Faculty, in-charge of the Centers and Directors to ensure security. For the further strengthening of security measures, an important introductory session has been held with the Director Rangers Pakistan (Sindh) in which all the faculty members were requested to attend this session. The session was held on May 11 at 11 am in Arts Auditorium. 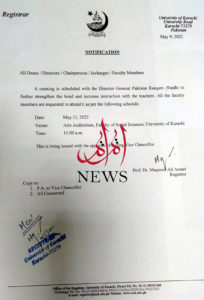 After which, once again on 9th May, the Acting Registrar Dr. Maqsood Ansari issued another notification in which the chairperson of the department, the dean of the faculty, the directors of the centers and the teachers were also included. A session with General Rangers Sindh will be held on May 12, the program will be held on Thursday at 10:45 a.m. in the Arts Auditorium. 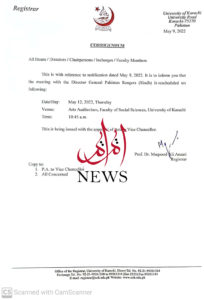 On the other hand, some teachers said that the university administration should have already invited all the teachers except the chairman, chairperson, dean and directors in the program of DG Rangers. The matter came to light in when the Rangers officials said that it was necessary to invite the general teachers in view of the arrival of the important person of the security agency, after which the acting registrar issued a new notification for the third time. All teachers will participate in this program.

Meanwhile, members of Karachi University Security Committee Mohammad Zubair, Abdul Jabbar, Maria Hamid and Mohammad Asif announced that the Silver Jubilee Gate has been closed for teachers and staff coming to the university by car, however, pedestrians and students and the Silver Jubilee Gate is open for female students, they will be able to come.

After which another announcement was issued by the secretary of KITS Mohsin Ali that the security staff has been contacted and teachers and employees can come from any gate, however, they should keep their card with them and ask us for any help. Keep in touch in this regard, some teachers say that in such emergencies, it is very important for the acting or permanent management to control their senses so that seeing their trust, thousands of other members of the institution will also feel frustrated. Instead of being in a state of panic, they can continue their work with self-confidence and humor, and like the current administration, by changing the schedule twice a day at an event, by keeping the canteen closed on hot days, 40,000 students are being harassed. If there are up to two or four cases, then inevitably thousands of subordinate teachers and employees will also be affected. 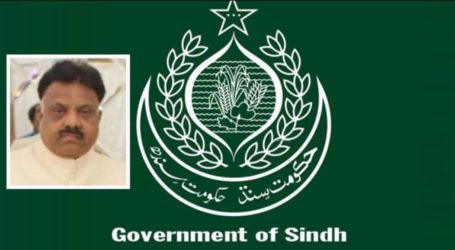 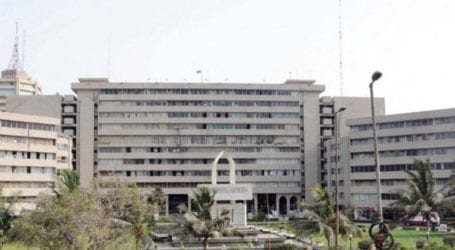 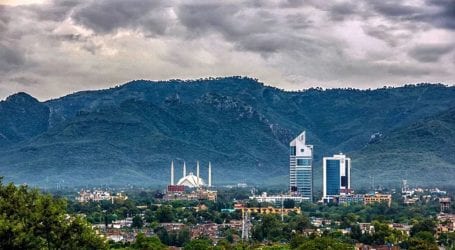