SWITZERLAND: Pakistan has fallen behind in the wage gap between genders slipping two spots since last year to rank 153rd out of 156 countries on the index, according to the ‘Global Gender Gap Report 2021’ published by the World Economic Forum (WEF) on Wednesday.

According to the report, Pakistan’s gender gap had amplified by 0.7 percentage points, to 55.6 percent, making it one of the worst countries for gender equality. Only Afghanistan, Iraq, and Yemen fared shoddier.

The ranking for the country Pakistan placed at 152 in economic participation and opportunity, 144 in educational attainment, 153 in health and survival, and 98 in political empowerment.

Pakistan ranked seventh among eight countries in the South Asian region, Afghanistan being the lowest. The report in its overall observation, commented that progress has stagnated, examining that the estimated time to close the gender gap has now augmented to 136.5 years.

The Global Gender Gap Report also tipped that the Covid-19 plague may have broadened the existing disparities in the country. 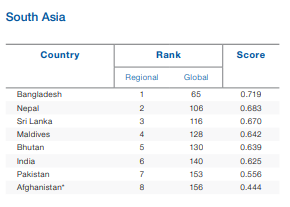 It is worth mentioning here Pakistan’s positions have worsened over time, with statistics accumulated showing that in 2006, the country leveled 112 in economic participation and opportunity, 110 in education attainment, 112 in health and survival, and 37 in political empowerment.

“Few women participate in the labor force (22.6 percent) and even fewer are in managerial positions (4.9 percent). This means that only 26.7 percent and 5.2 percent, respectively, of these gaps, have been closed so far, translating into very large income disparities between women and men: on average, a Pakistani woman’s income is 16.3 percent of a man’s,” the report indicated.

Though, improvement has been seen with more women taking on professional and technical roles — 25.3pc, up from 23.4pc in the previous edition of the index. It pointed out that women do not have equal access to justice, ownership of land, and non-financial assets or inheritance rights.

Pakistan has closed 94.4pc of its health and survival gender gap, the report stated, adding that the gap on this sub-index was negatively impacted by a wide sex ratio at birth (92pc) due to gender-based sex-selective practices. Around 85pc of women have suffered intimate partner violence, it further said.

Pakistan’s rank is relatively higher for political empowerment, the report said, observing however that only 15.4pc of this gap has been closed to date. “With just 4.7 years (in the last 50) with a woman as head of state, Pakistan is one of the top 33 countries in the world on this indicator. However, women’s representation among parliamentarians (20.2pc) and ministers (10.7pc) remains low.”

Find out which nation tops the rankings for most gender-equal country for the 12th year running: https://t.co/QMoz8vKmkL#gendergap21 pic.twitter.com/4dZbDMdTNu