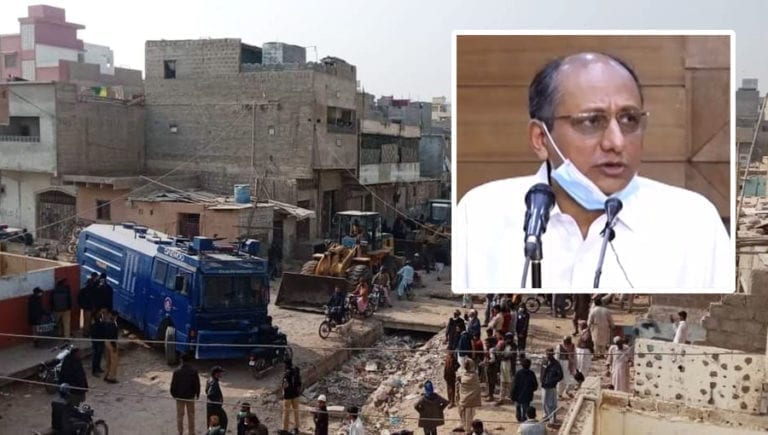 The PPP leader, who was elected from the constituency, reportedly got Assistant Commissioner Ferozeabad Sajida Qazi and SHO Baloch Colony transferred to protect the properties of his supporters during the drive against illegal encroachments which has been initiated on the order of the court.

The assistant commissioner had even marked the houses for demolition in Saeed Ghani’s constituency and issued notices for eviction to the residents of all illegal structures and buildings. After the notices were issued, the residents reporedly approached Ghani who agreed to stop the operation but he was unable due to the involvement of the federal government.

Sources revealed that Ghani has a role in the failure of the operation. Authorities faced immense resistance from the residents when they conducted the operation. The first operation was started on November 19 led by KMC senior director in Manzoor Colony and was abruptly halted when masked protestors attacked a fire station and destroyed the wall and also pelted stones.

Sources further revealed that women protestors were brought from other areas to create hindrances in the operation and create a commotion which eventually compelled authorities to call off the drive. The protestors caused massive damage to public property and even injured a policeman.

SHO Baloch Colony Zubair Nawaz lodged a case against the protestors on a complaint of the KMC employees and included Anti-Terrorism Act (ATA) sections. Police sprang into action and conducted raids and arrested several area residents while many of the perpetrators have been absconding.

Sindh Chief Minister Murad Ali Shah held a meeting with NDMA officials and assured them the government will remove the encroachments along the drain. He instructed the anti-encroachment teams to address the reservation of Saeed Ghani over the operation.

The Sindh government eventually decided to allow encroachment for up to 20 feet. On one side of the drain lies Liaquat Ashraf Colony where the buildings were given on lease while Manzoor Colony is on the other side where majority of the houses are illegal.

Sources revealed the Sindh government is attempting to protect the house in Saeed Ghani’s constituency and the illegal buildings are also being considered as leased houses. Ghani held meetings with UC 2 and UC 6 president Nadeed Khiyali and Tariq Gujjar and instructed them that the operation should continue under the directives of the PPP representatives and remove the least number of houses in his constituency.