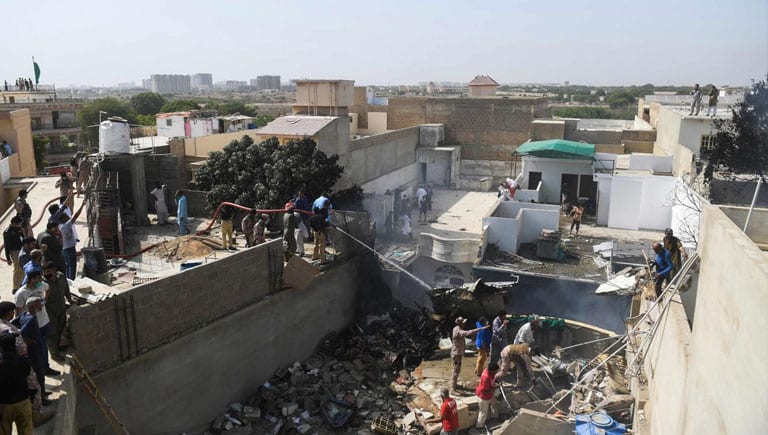 The Airbus A320  aircraft crashed near a residential area of Jinnah Garden in Model Colony area near Malir Cantt. The aircraft was traveling from Lahore to Karachi and crashed minutes before landing.

PIA Flight No. PK-8303 left Lahore at 1305 hours with 98 onboard including 90 passengers and eight crew members. A message was received from Air Traffic Controller that the aircraft has crashed close to the landing at Karachi.

PIA has installed a counter at the Lahore airport to guide the bereaved families. PIA Spokesperson Abdullah Khan said that the process of identification and handing over bodies to the families is underway.

He said that according to the PIA laws, the families will get Rs500,000 in compensation. He said that the airline’s district managers will visit the homes of crash victims and pay for the burial process. He said that 21 bodies have been identified so far.

PM Imran Khan issued special directives as per which one million rupees per deceased person will be given for burial.

Forensic teams from the Punjab Forensic Science Agency arrived in Karachi have arrives to collect DNA samples from the victims of the crash incident.

The teams will also collect samples from the bodies and the victim’s parents, siblings or children to identify them. The samples will be sent to Lahore and the result of the DNA tests will be available within 24 hours.

The relief and rescue work at the site of the plane crash near Karachi airport is underway and 97 dead bodies have been recovered from the debris until now while the two survivors of the crash are under treatment in the hospital.

According to ISPR, the rescue operation is in progress by army search and rescue team, army troops, Rangers personnel and social welfare organisations. The miliary’s press wing confirmed that 97 bodies have been recovered and two passengers have survived the incident.

It added that 25 affected houses cleared and their residents have been accommodated at various places with the assistance of the civil administration.

According to a spokesperson of the Provincial Health Department, 66 bodies of the crash victims have been shifted to Jinnah Post Graduate Medical Centre (JPMC) while 31 dead bodies are in Civil Hospital, while nineteen bodies have been identified so far.

Meanwhile, Corps Commander Karachi Lieutenant General Humayon Aziz also visited the site of the tragic incident and reviewed the ongoing rescue and relief operation. He said that on the directive of army chief, personnel of Pakistan Army and Rangers participated in the rescue operation.

The security forces have found the black box of the plane.The sources said that the Safety Investigation Board has taken the black box into custody to ascertain the cause of the crash.

PIA spokesperson Abdullah Hafeez said that Safety Investigation Board has launched investigations into the plane crash. He said that the cause of the crash could not be ascertained before the completion of the investigation.

According to authorities, three people including the President of Punjab Bank are on the survivors’ list. Two others were identified as Zubair and a woman Tahira.

19:30 pm, 35 dead bodies have been retrieved from the crash site

According to initial reports, 35 dead bodies have been retrieved from the crash site while injured have been shifted to Jinnah and Civil hospitals for treatment.

It is still too early to say if there are more survivors from the tragedy, by Masud’s story has offered a glimmer of hope to rescue teams racing to save as many souls as they can.

He was shifted to the Darul Sehat Hospital after being recovered from the crash site and is reportedly out of danger.

Masud has sustained fractures to his hip and collar bones, the Darul Sehat Hospital’s administration said, adding that there were no burn marks on his body, only scratches.

According to ISPR, Army Quick Reaction Force and Pakistan Rangers Sindh troops reached the incident site for relief and rescue efforts alongside civil administration. It said army aviation helicopters have flown to the crash site for damage assessment and urban search and rescue teams are also being dispatched to the site for rescue efforts.

A PIA aircraft with more than 100 passengers on board has crashed near Jinnah airport in Karachi.#planecrash #pia #karachi #mmnewstv pic.twitter.com/JtCWT6q3Df

Chief of Army Staff General Qamar Javed Bajwa condoled the loss of precious lives in the incident and said he shares grief of bereaved families in this difficult time. The army chief directed provision of full assistance to civil administration in rescue and relief efforts.

Special Assistant to Prime Minister on Information and broadcasting Asim Saleem Bajwa said that all emergency services and resources have been mobilised and evacuation is in progress on directives of Prime Minister Imran Khan.

Sad News:Our heart goes out to all families of on board passengers of the ill fated PIA plane that just crashed close to Karachi Airport. On PM’s directions, all emergency services & resources mobilised,evacuation in progress.More details will be shared subsequently

Chief of the Air Staff Airf Chief Marshal Mujahid Anwar Khan expressed grief over the tragic air crash. He further said that Pakistan Air Force stands by PIA at this difficult time and extends all out support in the rescue operation.

Federal Aviation Minister Ghulam Sarwar also expressed deep grief and sadness over the incident and has ordered the Aircraft Accident Investigation Board to conduct an immediate inquiry into the crash.

Federal Information Minister Shibli Faraz called it an “extremely saddening accident”. He said: “We are with the affected families in their grief. The primary attention is on relief activities right now.”

CM Sindh has directed IGP and Commissioner Karachi to ensure all possible relief operations at the crash site. May Allah help us all in such difficult times

Prime Minister Imran Khan has ordered an inquiry into the tragic plane crash incident. On a social media website Twitter, the prime minister said that an immediate inquiry in the crash incident will be instituted.

PM further said that he is shocked and saddened by the PIA crash. He maintained, “Am in touch with PIA CEO Arshad Malik, who has left for Karachi & with the rescue & relief teams on ground as this is the priority right now.”

Shocked & saddened by the PIA crash. Am in touch with PIA CEO Arshad Malik, who has left for Karachi & with the rescue & relief teams on ground as this is the priority right now. Immediate inquiry will be instituted. Prayers & condolences go to families of the deceased.

20:00 pm – Following is the list of all passengers on the ill-fated flight:

Pakistan International Airlines’ (PIA) Chief Arshad Malik has said that the crashed plane was technically sound and cleared for operation.

Addressing a press conference, Malik said an in-depth inspection and a transparent inquiry will be carried out into the incident in which the PIA officials and Civil Aviation Authority will not be a part.

The PIA chief said that all facts will come to light after the inquiry report and then the compensation package for the victims and their families will be announced. “A transparent inquiry will be conducted and true information will be given to heirs of the victims,” he mentioned.

Malik said those who lost their lives in the incident are martyrs. “I condole with the families of the victims and pray that Allah gives them courage to bear the tragic loss,” he said. He said that hotels at the airport have been allotted to facilitate those affected in the incident.

To a question by reporters, Malik said that as the probe into the incident is under way so we do not have much information over the matter. However, facts will come into light after the inquiry is completed.

Malik pointed out that all the pilots and crew members of PIA are qualified and possess technical knowledge. He said the plane crashed the second time when it tried to land.

He said “The pilot had attempted to land at the airport but landing gear was not opening. The plane was crashed when the pilot made another attempt to land the aircraft.

He stated that 19 victims were shifted to Jinnah Hospital while 22 others were transported to different medical facilities in the metropolis.

This is a developing story and will be updated accordingly. 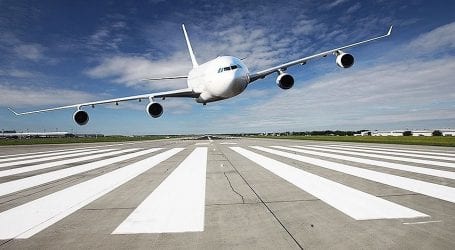 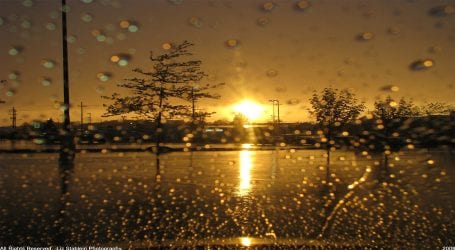 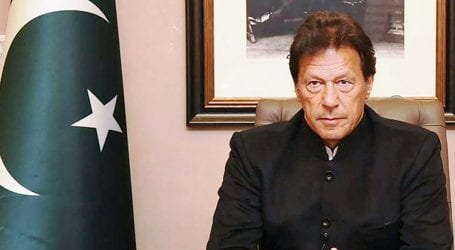