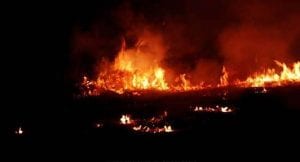 BAGHDAD: Five rocket hits late Sunday near the US Embassy in the heavily fortified enclave in Baghdad’s Green Zone after the escalating Middle East conflict. The attack has been a dangerous escalation in the recent month of rocket attacks aimed

Pakistan has raised apprehensions that India has deployed missiles in held Kashmir. Foreign Minister Shah Mehmood Qureshi has written a letter to the UN that India is planning to launch an attack on Pakistan to divert the word’s attention from