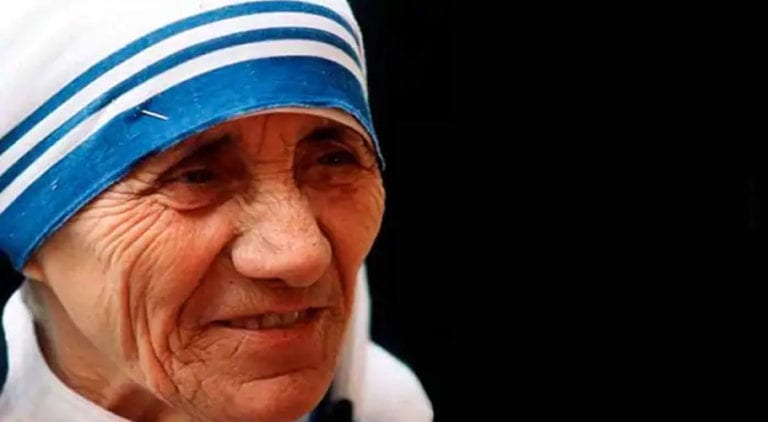 Today marks the 110th birth anniversary of Mother Teresa, also known as Saint Teresa of Calcutta, who dedicated her life to serving humanity and caring for the destitute,

Mother Teresa, was born as Agnes Gonxha Bojaxhiu in Skopje, Macedonia. She was the founder of the Order of the Missionaries of Charity, a Roman Catholic congregation of women dedicated to the poor and destitute in India. She was the recipient of numerous honours including the 1979 Nobel Prize for Peace.

She went to Ireland in 1928 to join the Sisters of Loreto at the Institute of the Blessed Virgin Mary and sailed six weeks later to India as a teacher. She taught for 17 years at the order’s school in Calcutta.

In 1946, she experienced her “call within a call” which she considered divine inspiration to devote herself to caring for the sick and poor. She moved into the slums she had observed while teaching.

Mother Teresa adopted Indian citizenship. In 1952, she established Nirmal Hriday (Place for the Pure of Heart), a hospice where the terminally ill could die with dignity.

Her order also opened numerous centres serving the blind, aged and the disabled. Under Mother Teresa’s guidance, the Missionaries of Charity built a leper colony called Shanti Nagar (Town of Peace) near Asansol, India. In 1962 the Indian government awarded Mother Teresa the Padma Shri, one of its highest civilian honours, for her services to the people of India.

In 1979 she received the Nobel Peace Prize for her humanitarian work, and the following year the Indian government conferred on her the Bharat Ratna, the country’s highest civilian honour.

In later years, Mother Teresa spoke out against divorce, contraception, and abortion. She also suffered ill health and had a heart attack in 1989. In 1990 she resigned as head of the order and retired completely in 1997. At the time of Mother Teresa’s death, her order included hundreds of centres in more than 90 countries and over 400 nuns.

Within two years of her death, the process to declare her a saint was begun, and Pope John Paul II issued a special dispensation to expedite the process of canonization.

She was beatified on October 19, 2003, reaching the ranks of the blessed in the shortest time in the history of the church. She was canonized by Pope Francis on September 4, 2016.