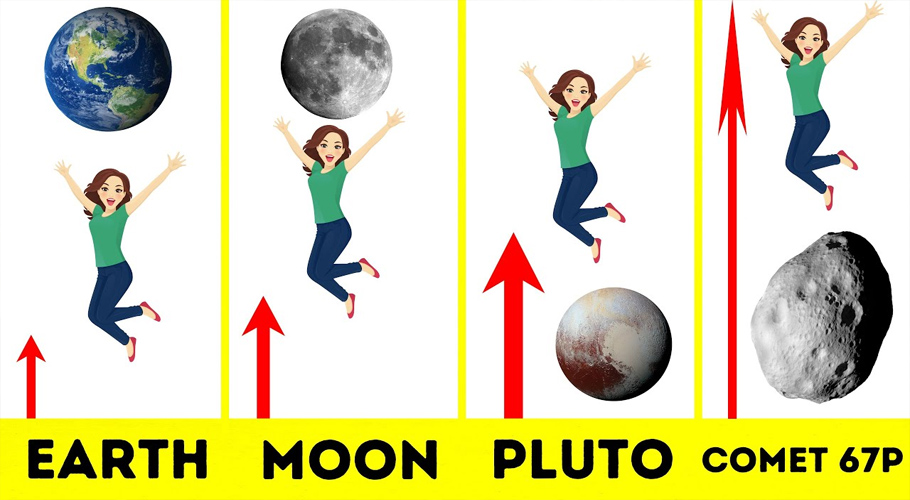 You have probably jumped hundreds of time during the course of your life but have you ever wondered how high can you leap on other planets? Probably not.

Let me tell you anyway. You can easily calculate the height of an average jump on other planets by replacing the earth gravity with that of other planets.

Weight is dependent on mass and acceleration or gravity ‘g’. The mathematical relationship can be described with the following equation: W = m x g (N). ‘g’ varies according to which planet you are standing on. In general, planets with more mass have stronger surface gravity.

So your weight can vary according to which planet you are standing on, however your mass stays the same.

Here are relative scaling factors for the surface gravity of the Sun, the other planets in our Solar System, Pluto (a dwarf planet) and the Moon. With this information one can calculate and compare the heights of his jumps and the reading that bathroom scales (calibrated on Earth) would have if they were to stand on the different bodies in the Solar System. 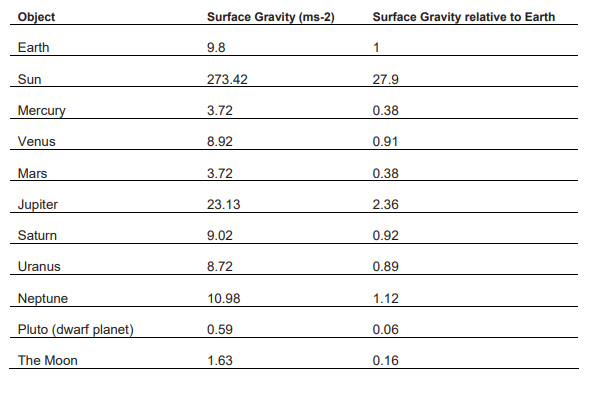 The stronger the surface gravity, the more they are pulled by the planet, moon or star so it would make it more difficult for them to jump.

But just in case, you can’t calculate yourself, here is a good video illustration of how high an average human can jump on different planets in our Solar system.

The average jump height of a person on earth and its equivalent in other worlds of the solar system🌍🪐 pic.twitter.com/SopsmB2LFq

The normal vertical hop for an average person on Earth is about 0.45 meter and the whole jump lasts a second. But on Jupiter, the same jump would go as high as 0.17 meter because Jupiter has more than 300 times the mass as Earth, so its gravitational pull much is stronger.

Neptune’s gravity is slightly more than the Earth, so height for an average’s jump would be 0.39m.

Venus, Uranus and Saturn have more or less the surface gravity relative to Earth, so the average hop would reach 0.49m.

Mars, a planet bigger than the moon yet considerably smaller than Earth, with about a third of its gravity, the average jump would roughly be 1.18m. Same case on Mercury as it shares the surface value of Mars.

Gravity at the surface of moon, the only place other than Earth where humans have dared to leap, is only 17 percent that of Earth’s. Using the same force of a jump on Earth, you could rise about 2.72m (10 feet) off the ground and stay in the air for about 4 seconds.

Pluto may be a dwarf planet, but it’s still pretty massive. Guess how high could you go?

The surface gravity on Pluto is barely 6 percent as strong as Earth’s. A good hop would send you about 7.11m or 25 feet in the air and let you enjoy the view for up to 9 or 10 seconds.

On Ceres, a dwarf planet in the asteroid belt between the orbits of Mars and Jupiter, an average fellow would be able to jump for about 15.75m.

Saturn’s moon Enceladus hides an entire ocean of liquid water under its icy crust and spits geysers into space. It might support life, but it’s just 14 percent the diameter of Earth’s moon.

Jumping on Enceladus would be super fun. You would rise up about 42.6m or 140 feet before floating back down, landing with the same force as if you had jumped on Earth. The trip would take a full minute.

On Phobos, Mars’ moon, an average hop could rise up to 773 meters or 2536 feet that would keep you in the air for approximately 17 minutes.

Comet 67P, is a Jupiter-family comet, originally from the Kuiper belt, has such a weak gravity field that the NASA’s Philaelander had to latch harpoons into the surface to stick around. Wonder what would happen if you jumped here.

Well, if you jumped on Comet 67P, you’d just float off into the void of space. Put another way, your legs are powerful enough to exceed this space rock’s escape velocity.

All these high jumps might have excited you by now to think about hopping on the Sun, well don’t. You can’t jump on the Sun because the gravitational force is just too high. 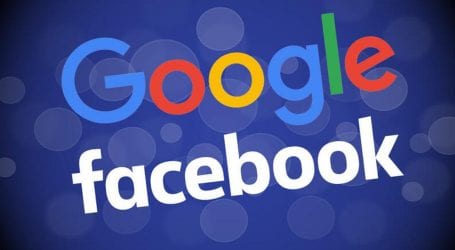 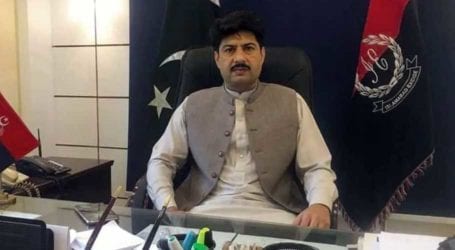 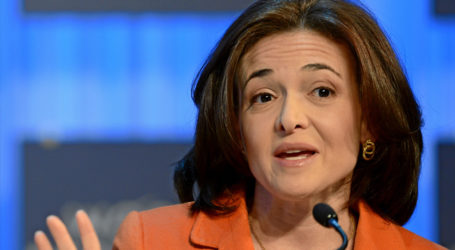