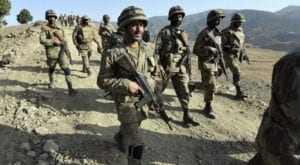 WAZIRISTAN: A notorious terrorist linked to the Tehreek-e-Taliban Pakistan (TTP) was killed by Security forces during an operation conducted in Khyber-Pakhtunkhwa’s North Waziristan district on Sunday. According to a statement issued by the Inter-Services Public Relations (ISPR), an area Sanitisation