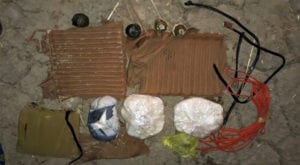 PESHAWAR:  Security forces on Monday foiled a major terrorism bid in Shahpur area of Peshawar. According to sources, on a tip-off, law enforcement agencies personnel conducted a targeted operation in Shahpur and recovered a cache of arms and explosives from