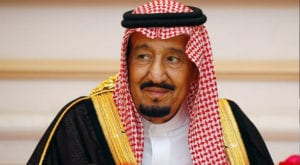 RIYADH: Saudi Arabia’s King Salman bin Abdulaziz took aim at Iran during his debut at the annual United Nations meeting of world leaders. He said Iran has exploited a 2015 nuclear deal with world powers “to intensify its expansionist activities,

RIYADH: Saudi King Salman held a cabinet meeting via video call from hospital in the capital Riyadh on Tuesday, a day after he was admitted for inflammation of the gall bladder. A video of the king chairing the meeting was