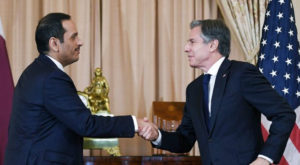 WASHINGTON: The United States said it would set up an interests section in Afghanistan under Qatar, creating a more direct way to assist US citizens and engage with the Taliban after the embassy in Kabul was shuttered. US Secretary of

KABUL: Afghan government has decided to release 100 Taliban inmates under the peace deal. A day earlier, the Taliban’s spokesman said they were walking out of talks with Kabul regarding the release of prisoners. He said the Taliban will also