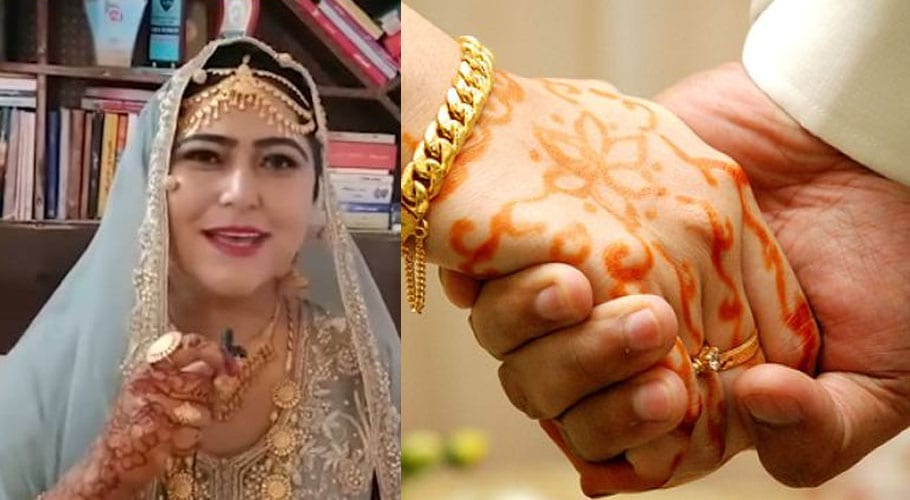 MARDAN: A bride in Mardan District of Khyber Pakhtunkhwa, has made history by breaking all tedious customs as she demanded her husband to give Rs 100,000 worth of books as ‘Haq Mehr’.

In Pakistan we may often have heard of brides who wish to receive cash, property or their favorite jewelry as ‘Haq Mehr’ from their husbands, however, we may not have heard about a bride asking for books instead.

A 31-year-old Naila Shamal, a resident of the Tangi area of ​​North Safi Charsadda set an example by demanding books as ‘Haq Mehr’from her husband to highlight the importance of education as well as breaking the tedious customs of society.

Haq Mehr is the obligatory payment — made in the form of money, jewelry, home goods, furniture and/or any other form of property — made by a man directly to his wife-to-be upon taking her hand in marriage.

Her husband Dr Sajjad Jwandun is a resident of Bhai Khan area of ​​Mardan. Dr Jwandun has completed his Ph.D. in Pashto while Naila is currently pursuing her Ph.D.

In a viral video on Twitter, Shamal can be seen dressed in a bridal outfit as she delivers an important message. “As you all know, I have demanded books worth Rs100,000 for Haq Mehr,” she says.

“One reason for this is that due to rising inflation in our country, we cannot afford expensive gifts. On the other hand, it is also important to eliminate wrong customs from our society,” she adds.

Shumaila then says that most women demand money and jewellery as Haq Mehr but she decided to settle for books as, being a writer, it was important for her to show reverence for books.

“If I, as a writer, do not attach value to books then how can we expect the common man to do so?” she asks. “The real reason I asked for the Haq Mehr is to give value to books so that we can also advise others to do the same,” she says in conclusion.

The video went viral on Twitter, as it garnered more than 29,000 views and was retweeted more than 350 times.

A bride Naila Shamal in Mardan KPK, Pakistan demanded books in Haq Mehr, worth 100k. The bride and the groom both are writers.

How much you love books? 😍 pic.twitter.com/zTQAVncYkF