Bollywood actress Kangana Ranaut, who is known for her portrayal of strong women in female-centric movies, has criticised the Indian film industry for not appreciating her film ‘Thalaivii’.

The Queen actress starrer ‘Thalaivii’ was released in theatres in September and is now streaming on Netflix. The actress, while penning a note of gratitude for her team on her Instagram account wrote, “Rarely a film loved passionately and unanimously… And Thalaivii is one such film… I am glad people getting to know Purchai Thalaivi Dr J. Jayalalithaa’s story.”

The actress also took a dig at Bollywood for not supporting the J Jayalalithaa biopic. Kangana, who often targets the Indian film industry and refers to a ‘Bollywood Mafia’ has urged the Hindi film fraternity to come forward and show support by appreciating her film. 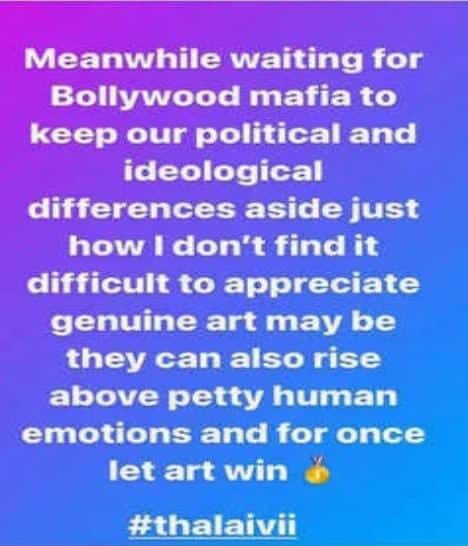 She wrote, “Meanwhile waiting for Bollywood Mafia to keep our political and ideological differences aside just how I don’t find it difficult to appreciate genuine art maybe they can also rise above petty human emotions and for once let art win #Thalaivii.”

Thalaivii is based on the life of former actress and Tamil Nadu Chief Minister J Jayalalithaa.  The movie features Kangana as Jayalalithaa and South superstar Arvind Swami as M. G. Ramachandran.