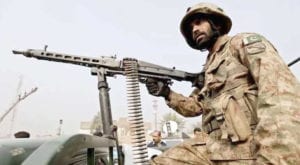 BAJAUR: Security forces have killed two terrorists linked with banned outfit Daesh during an Intelligence Based Operation (IBO) in Bajaur district of Khyber Pakhtunkhwa, the military’s media wing said on Monday. According to the Inter-Services Public Relations (ISPR), the terrorists