Three held over attempted rape of girl in Murree 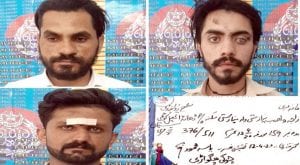 MURREE: Three suspects were arrested on a girl’s complaint filed against them over their alleged involvement in attempting to rape her near Fagwari check post Punjab. Police officials said that an FIR was registered at the Murree police station against