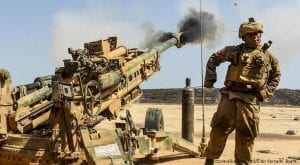 BAGHDAD: At least six people, including a commander of Iraq’s Hashd al-Shaabi paramilitary forces killed in a fresh US airstrike in wee hours of Saturday. According to reports, as uncertainties grew of a surrogate war erupting between Washington and Tehran