Leader of the Opposition in Senate will be from PML-N: Maryam tells PPP 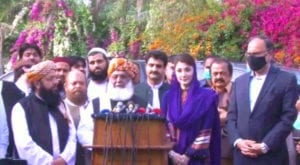 LAHORE: Pakistan Muslim League-Nawaz (PML-N) Vice President Maryam Nawaz has said that the Leader of the Opposition in Senate would be from her party, as a formula had already been decided by the Pakistan Democratic Movement (PDM) leadership. Addressing a