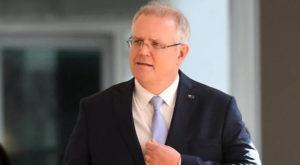 CANBERRA: Australia’s Prime Minister Scott Morrison has fended off accusations of racism and having blood on his hands Tuesday, as he retreated from a threat to jail Australians trying to escape Covid-wracked India. Australian authorities moved to ban travelers, including