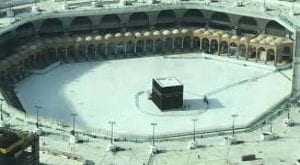 SAUDI ARABIA: The Saudi Arabian authorities today (Tuesday) have announced that Tawaaf has been resumed at Holy Kaaba allowing a small number of people to perform their rituals. The announcement was made on the official twitter account of www.haramain.com that