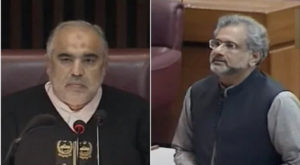 ISLAMABAD: Former prime minister Shahid Khaqan Abbasi has abjured parliamentary manners by giving threats to Speaker National Assembly Asad Qaiser in a special session of the National Assembly on Tuesday. While speaking on the floor of the lower house, the