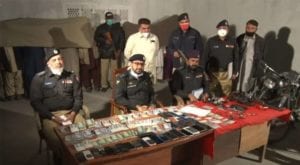 KARACHI: Police claimed to have busted two gangs of robbers who were involved in carrying out house robberies in several localities of the metropolis on Tuesday. As per details, in a major operation against street criminals police have arrested 10-members