Israel’s violence against Palestinians: Will the Muslim world wake up from the deep slumbers? 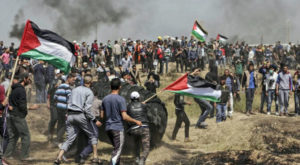 The Israeli-Palestinian conflict is one of the world’s longest-running and most controversial conflicts as a result clashes between the two counties once again escalated in Jerusalem. More than 45 Palestinians and several others were injured as Israeli forces targeted innocent