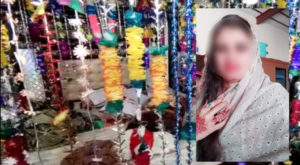 MULTAN: Four armed men clad in police uniforms allegedly ganged-raped a bride and made off with five tolas of gold and Rs125, 000 in cash in the Shujaabad area of Multan, sources said on Wednesday. According to sources, four-armed criminals