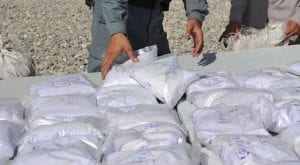 BALOCHISTAN: Pakistan Navy has seized 700 kilograms of narcotics in an intelligence-based joint operation with the Anti-Narcotics Force (ANF) near Pishukan coast, Balochistan on Wednesday. According to a spokesman of the PN, the drugs are valued at approximately Rs 2.2 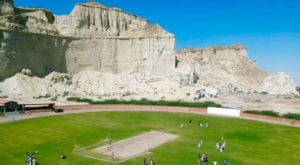 GWADAR: Gwadar Cricket Stadium is expected to host a friendly match on March 25, between Karachi Kings and Quetta Gladiators clash after the conclusion on ongoing Pakistan Super League (PSL) season six. As per details, singer-cum presenter Fakhr-e-Alam, who recently 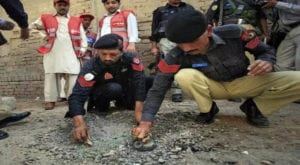 BALOCHISTAN: More than 16 people have been injured in a blast in Balochistan’s Sibi on Friday. According to police, terrorists on a motorcycle lobbed a hand grenade at Luni Chowk, as a result, 16 people sustained injuries. Sources said a 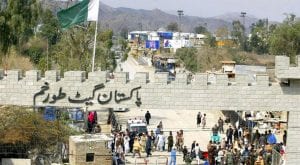 QUETTA: Minister for Home and Tribal Affairs, Mir Zia Langove has said that steps were being adopted to amicably address the issues of business community fencing along the Pak-Afghan border. While presiding over a high-level meeting held on Tuesday in 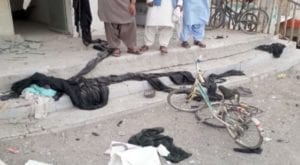 QUETTA: At least four people were injured in a blast near Quetta’s Sariab Road on Saturday. An official of the bomb disposal squad said that it was a home-made device packed with five-kilogram explosive material. Motive behind the explosion was 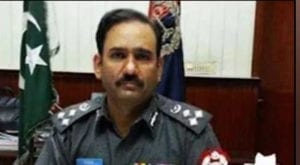 ISLAMABAD: The government has decided to transfer Inspector General (IG) of Balochistan Mohsin Hassan Butt and appoint Rai Tahir as a new IG of the province. As per details, Rai Tahir, who is currently serving as Additional IG CTD Punjab, 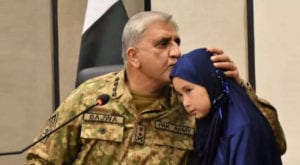 QUETTA: Army Chief Gen Qamar Javed Bajwa has assured families of the Shia Hazaras coal miners killed in a brutal attack in Balochistan’s Mach area that the killers of the killings shall be brought to justice. According to Inter-Services Public 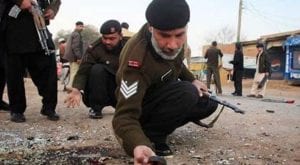 BALOCHISTAN: At least four people were injured in an explosion in Turbat’s Cinema bazaar in Balochistan on Sunday. According to details, the blast occurred near the check post of security forces and also damaged two nearby cars. Soon after the 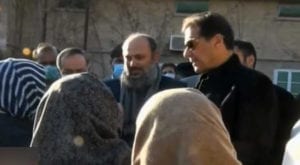 QUETTA: Prime Minister Imran Khan reached Quetta on Saturday where he met with the families of the slain coal miners killed on Jan 3 in a brutal attack in Mach and reaffirmed that the present government is fully committed to 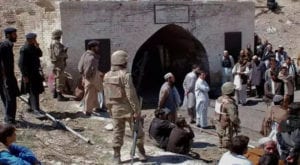 QUETTA: Six coal miners were killed and four others injured after armed men opened fire at them at the Machh coalfield in Balochistan on Sunday.  According to police sources, a group of unknown armed men took the coal miners to 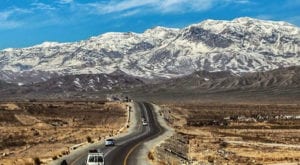 QUETTA: Chief Minister Balochistan Jam Kamal Khan has said that solid steps are being taken to uphold tourism and protect archeological sites in the province. Chairing a meeting in Quetta to review the progress on development schemes related to the 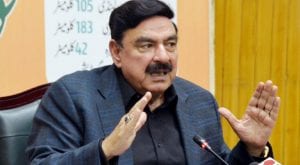 PESHAWAR: Interior Minister Sheikh Rashid Ahmed has said he was confident that Prime Minister Imran will complete his five-year term with great success. Addressing a press conference during a visit to Torkham, the interior minister Commenting on Prime Minister Imran 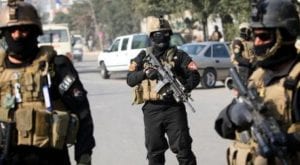 QUETTA: Pakistan Levies claimed to have foiled a major terrorism bid in the Khuzdar area of Balochistan on Friday. According to sources, on a tip-off, the Levies force recovered 88kg of explosives material from a vehicle at Zawah check-post in 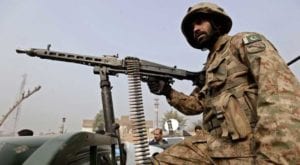 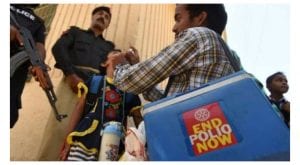 QUETTA: Another case of the crippling poliovirus disease has surfaced in Balochistan, taking the tally of the cases for the current year to 21 in the province. The provincial health department has confirmed that a 10-month old girl, a resident 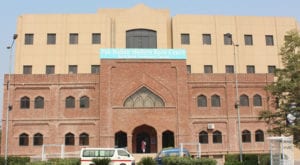 KOHLU: At least 15 people died on Tuesday from a cylinder blast in Balochistan’s district.  More than 34 people, mostly children, were injured in a gas cylinder blast during a marriage ceremony in Kohlu a few days back. The incident 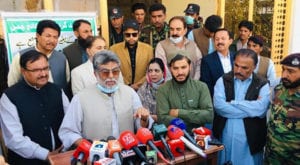 BALOCHISTAN: Balochistan Education Minister, Sardar Yar Mohammad Rind has said that the provincial government given approval for the appointment of 1,200 male and female teachers to handle the shortage of teaching staff in government schools across the province. The provincial 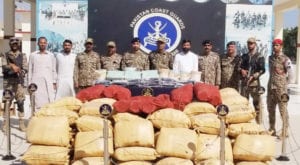 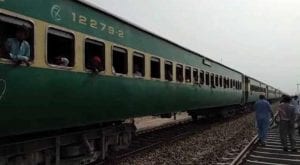 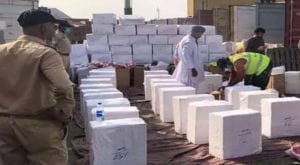 QUETTA: Customs authorities have seized smuggled goods worth Rs 80 million from Kuchlak area Quetta on Friday. According to the spokesperson of the Pakistan Customs, smuggled clothes, auto parts, tires, oil, cigarettes, and two tractors were recovered during a targeted 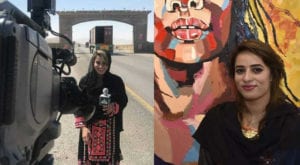 GWADAR: Police on Tuesday claimed to have arrested an accused named in a case pertaining to the killing of Balochistan’s prominent social activist and a journalist, Shaheena Shaheen. According to police sources, the accused Sumaid Saeed was taken into custody 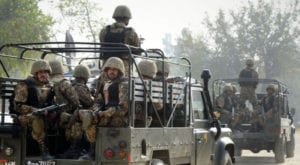 RAWALPINDI: Security forces have foiled a “possible terrorist activity” during an intelligence-based operation (IBO) in Southern Balochistan on Saturday. Inter-Services Public Relations (ISPR) in a statement said a major terrorism activity was foil by security forces as they successfully conducted 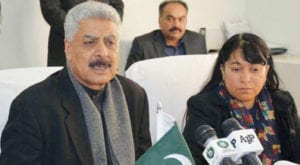 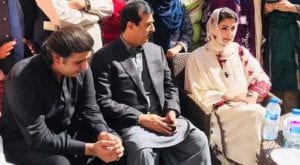 QUETTA: The 11-party Opposition, under the banner of the Pakistan Democratic Movement (PDM), held its third power show in Quetta despite the provincial government’s appeal to postpone the rally amid security threats. According to details, president of the newly formed 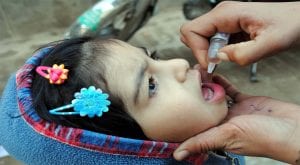 QUETTA: A four-day anti-polio vaccination drive will begin in all 33 districts of Balochistan from tomorrow (Monday). Balochistan Emergency Operation Centre (EOC) Coordinator Rashid Razzaq said all preparations have been completed for the anti-polio drive. Around 10,585 teams will be deployed to 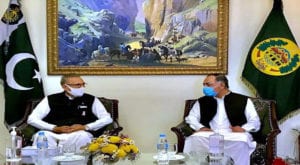 QUETTA:  With the number of coronavirus cases rising in the country, President Dr Arif Alvi has urged the nation to opt for precautionary measures to avert the resurgence of the virus. While talking to Governor Balochistan Justice (retd) Amanullah Khan

QUETTA: Law enforcement agencies claimed to have killed four terrorists during an intelligence-based operation in the Mastung district of Balochistan on Friday. According to CTD sources, a joint operation conducted by Counter-Terrorism (CTD) and intelligence agencies in the Dasht area 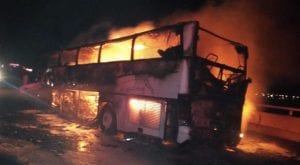 BALOCHISTAN: Five people were killed and three others injured after a passenger bus caught fire in Khuzdar district of Balochistan province on Friday. Women and children were among the killed, according to paramilitary troops in Khuzdar, who said at least three 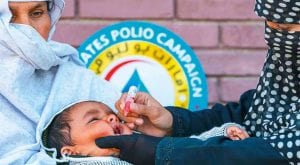 QUETTA: The polio emergency operation center Pakistan has reported two more polio cases from on Saturday. According to the health department, polio was confirmed in a 4-year-old child in the Chilton Town area of ​​Quetta while a 15-month-old child was